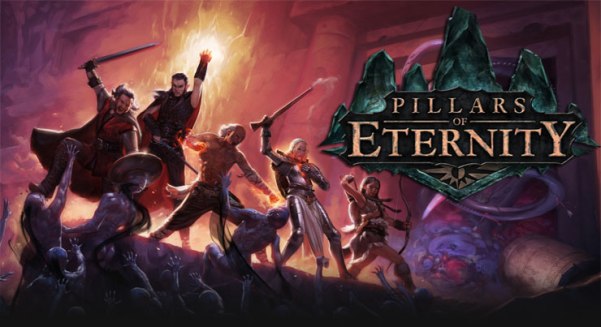 This month I have had the pleasure of interviewing the hugely talented Brandon Adler from one of my favourite games companies Obsidian Entertainment. Obsidian is best known for great games like Neverwinter Nights, Fallout New Vegas and the recently successful kickstarter title Pillars of Eternity. We got chatting about Kickstarter, working in the games industry and all things Obsidian.

Well, my name is Brandon Adler and I have worked at Obsidian for close to ten years. Started off in QA and worked my way into a production role. I am currently the Lead Producer on Pillars of Eternity and another unannounced title.

How did your love of games start?

I am not sure when my love of games started, but some of my earliest memories involve playing against my dad in R.B.I. Baseball for the NES. I can also remember putting way too much time into Asteroids on our Atari 2600.

How did you get into the games industry?

Most people have a pretty good story about how from a young age they always knew that they wanted to make video games. That wasn’t me at all. I just kind of fell into video games. I just needed a job while I was going back to school to complete my computer science degree.

One night (after just quitting my job as a manager at a Barnes and Noble Café) I was sitting around playing my PS2. It just kind of dawned on me that I might be able to take a short term job with a gaming studio as a QA tester. I had never really considered anything like that in the past.

I started digging through all of my games and came up with a large list of developers and publishers (I didn’t really understand the difference at the time). After researching each company to find out how close they were to Irvine I ended up with a much smaller list that I applied to.

I tested for Blizzard. I also tested and interviewed at Atlas and Obsidian. In the end, Obsidian was the first company to call me back with an offer to work on Neverwinter Nights 2. I am pretty sure that the main reason I got a call back was my knowledge of D&D.

You guys at Obsidian have an amazing collection of games you have created and worked on, which has been your personal favourite?

This is probably going to sound strange to people, but it would probably be Alpha Protocol. The story had so much reactivity. Even after playing the game daily for nine months straight I was still finding new ways through conversations.

Obsidian fell on hard times a few years ago what was it that made you turn to Kickstarter for Pillars of Eternity?

To hear Adam and Josh tell it, though, it seems like the success of the Broken Age Kickstarter was a large influence. It showed that passionate fans (and Obsidian has a bunch of those) would be willing to donate to a studio to create games that weren’t popular in the traditional publisher models. Pillars of Eternity was the perfect type of title for Kickstarter.

Kickstarter was a great success for you, did it add more pressure to Pillars knowing it was fans and backers money behind the game?

Of course. We took our promises to our fans and backers very seriously. If we promised something to our backers we tried to deliver as best we were able.

Seventy thousand folks put their money where their mouths were. That’s a pretty powerful motivator. It makes you want to do everything you can to give them the best experience possible.

How did it feel seeing so much support from fans and backers after so much stress within the company?

Josh and Adam have mentioned that when Project Eternity was funded it was probably the best moment of their times at the company. I can see why.

Not only is it validation of your previous work, but it lets you know that people are rooting for you to pull through the hard times. Pretty cool feeling.

The company did eventually have to downsize the amount of staff just before developing Pillars of Eternity, was it more stressful during the development having a small team or was it better to have a close knit team to communicate with?

I think it was very helpful for the team, overall.

What it made us do was question our decisions more than we probably normally would on a project. When you don’t have extra money or resources, you have to make sure that you aren’t wasting work (and time).

So it was a good stress. The kind of stress that helps you shine. 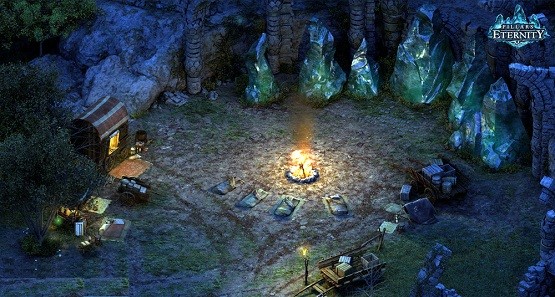 Pillars of Eternity is a fantastic game, it’s very different to most games in this generation. What was it that made you guys want to make a cRPG?

cRPGs are in Obsidian’s blood. Many of the folks at Obsidian (and on the Pillars team) are vets from Black Isle and Troika. We always want to make cRPGs.

With Pillars, we knew that we could deliver the kind of experience we were promising to our backers. We knew how to make an Infinity Engine style game because many of our developers HAVE made them before.

The game has been very successful with brilliant reviews, how did you feel after the release seeing all this feedback?

To be completely honest, I was really surprised. I knew that we had a fun game, but I didn’t think it would be the type of title that would review well.

I remember talking to Adam a few days before launch about potential review scores. Neither of us was mentioning reviews in the 90s.

When a game is released developers have to keep on top of bugs and updates, how much time is spent on a game even after release?

We haven’t stopped since the game’s release. We have a dedicated QA staff that is constantly going through forums to try and find the bugs that are particularly nasty (or annoying). The list is constantly growing with bugs and feedback.

Working on the expansion was a blessing and a curse. Since we were actively developing the game it made it much easier for us to fix some of the larger problems people reported. At the same time, since those people had their time accounted for with new content, we had to do a balancing act.

We were able to do quite a few updates so I think it worked out pretty well.

Games media has changed over the years, platforms like YouTube and streaming on Twitch have become very important.  As a games company how you do get involved with or adapt to the changes in media?

One big change is that we now have a Social Media Coordinator (Hi, Mikey!). We take all social media and streaming very seriously.

Traditional outlets are still really great for getting the word out about your game, but we have gotten a ton of great press from streamers like Angry Joe.

I personally watched  and loved your Pillars of Eternity streams on twitch, how do you take on board the different types of feedback in the Twitch chat or Youtube comments which is sometimes known for trolling?

The most important skill you can have as a game developer is learning how to understand and incorporate feedback. Very few people outside of your team understand the exact goals and constraints of the project, so all feedback has to be viewed through those constraints.

Also, just because an opinion disagrees with your own doesn’t mean it isn’t valid. You have to be able to separate the argument from the comment and evaluate it on its own merit.

Also, when I said it was the most important skill, I wasn’t lying. In my opinion it is what separates the good game developers from the great ones. That probably applies to most fields, though.

What is next for obsidian?

In the immediate future, we are putting out the digital version of the Pathfinder Adventure Card Game. That is dropping in March. I think fans are going to really love what that team has done with that license.

Obviously we still want to make games in the Pillars universe. That is a big priority for us. We are starting to talk right now about what future Pillars products would look like.

The Team at Obsidian Entertainment

What is your favourite game?

That isn’t an easy question to answer. I’ll give you the three that I have played the most: Final Fantasy Tactics, Psychonauts, and Binding of Isaac.

Who is your favourite game character out of the Obsidian game catalogue?

What has been your proudest moment working with Obsidian?

Releasing Pillars. It was the first Obsidian game I worked on where I felt I had a significant role to play in its development.

What up and coming games are you personally looking forward to playing in 2016?

The Division is one that could be fun. I’ll find out this weekend during the open beta.

I would like to thank Brandon for taking part in the interview and for his amazing work with Obsidian Entertainment. If you would like to know more about the fantastic work these guys do head on over the following:

One response to “INTERVIEW: Obsidian Entertainment”