You may remember that I have taken on the task or quest in this case to play the top 25 RPGs of all time according to PC Gamer. The first game on my list was South Park The Stick Of Truth, I personally thought I was going to fall head over heels in love with this game.. turns out I have pretty mixed feelings about it .

South Park + RPG game surely this is my jam, surely the combination of one of my favourite TV shows and my favourite game genre means nothing but sheer gaming bliss for me? Here’s the thing, I know I’ll get a lot of complaints and backlash about this but for me South Park The Stick Of Truth was a swing and a miss.

I know I know  ‘  Sarah this game is hilarious its in the top RPG list” yeah and I get that but in my own personal experience South Park TSOT just didn’t grab me. I wanted it to, I really did. I am in no way saying that it is a bad game it most certainly is a good game, I understand it’s appeal but does it deserve to be among the top 25 RPGs? my answer is simply No.

Lets start of with the dialogue and humour, this game is very funny to the point where you are laughing out loud. The writing really is fantastic. It is a love letter to fans of  the show it has references to so many things from the TV show itself, the jokes and gimmicks never fail to at the least get a giggle out of you. One of my favourite things about South Park STOT is when you casually open a neighbours door and see the unspeakable .. like a guy fucking a horse. It’s them little shell shock moments that keep you wanting to explore.

Combat, right so here is where it became a little tricky for me to form an honest straight to the point opinion. As you may be aware of I adore Final Fantasy ( the good Final Fantasy’s not the shit they’re throwing out today with 13) I love turn based combat, it gives you the time to plan your moves accordingly and when its successful it makes you feel like a bad ass. South Park’s combat with the timed stuff just fell short for me. I get that they were trying to make it more interactive, I just personally don’t like timed trigger mechanics I didn’t even buzz off it in Lost Odyssey ( I feel your eyes judging me). The moves and attacks are hilarious and the interactivity between the characters is great but as each battle passed the more tedious I found it to be.

The world or should I say town in this game is awesome the creators and writers really worked together here and pulled of the feel of truly exploring South Park. I found myself at the start walking through every street purposely avoiding fast travel so I could witness all the strange goings on with my own eyes. Friends had been telling me all the hilarious things they had seen and now it was my turn to laugh my ass off. Unfortunately I think I played this game too long down the line, many things had been spoiled I didn’t laugh as hard as many other players. Maybe that is why this game was a swing and miss for me, I played it too late and witnessed all the hype, seen the screenshots and read all the tweets about the little hidden things within the game.

South Park The Stick of Truth is a funny game not an amazing or a ground breaking one, to me it was just a funny game. I enjoyed some of my time there but I cant see myself returning any time soon. 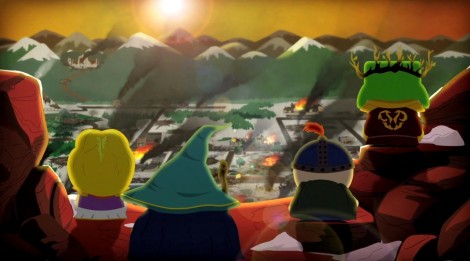 The next game on my quest is The Dungeons of Dredmore!!

Here is a link to the list of games I will be embarking upon:

Some have been swapped out, any changes you would like to make let me know in the comments.